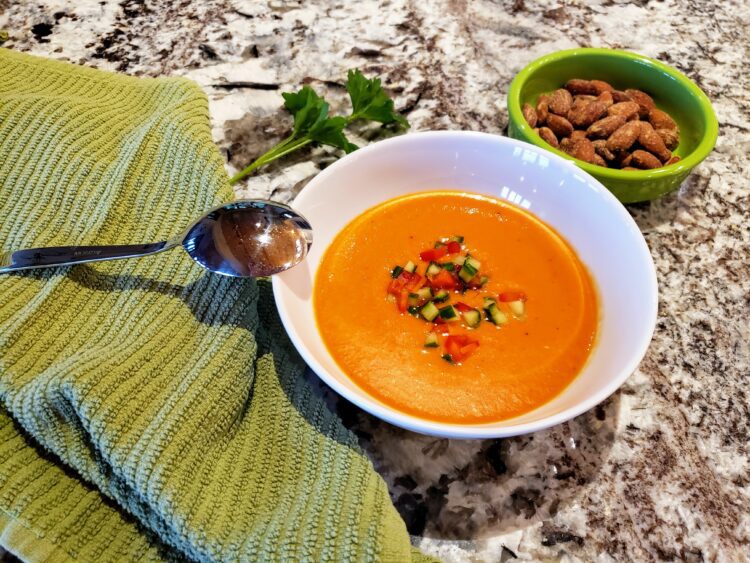 This is one of these recipes I’ve waited years to make and now wonder why… The first time I tasted gazpacho was at a friend’s ranch house in Texas where she was growing her own tomatoes. I fell in love with it at first spoon, and went on to try and replicate it, but my first attempts were a bust and I gave up, thinking the magic was in her tomatoes.

Well, some of that is true, the magic is in the tomatoes, and your gazpacho will only be as good as the tomatoes you use… However, I recently went on a new quest for gazpacho recipes, bought some good heirloom tomatoes at the peak of ripeness, and lo and behold, I have managed to replicate the flavor I had been chasing for all these years!

To be quite honest, my first attempt turned a gross brownish color as I had used green bell peppers and had not peeled my cucumber (I like the peel which is full of nutrients, but in this case detrimental to the appearance of the dish…). But the second attempt was the charm!

So the following recipe is my gazpacho 2.0, which turned a beautiful red/gold color.

Note that the addition of bread is optional but traditional in Andalusia, where this dish originated. It gives a nice smooth texture and binds the soup together.

Give it a try! 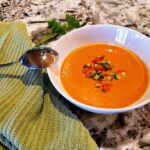 Nothing more refreshing in the summer than a cold tomato soup made with tomatoes at their peak of flavor… Drink it or eat it with a spoon, turn in into a Bloody Mary – why not – you'll get a burst of vitamin C and lycopene!
Prep Time15 mins
Cook Time0 mins
Total Time15 mins
Course: Appetizer / Hors D’Oeuvre, Drink, Soup
Cuisine: Mediterranean, Spanish
Keyword: bell pepper, red onion, tomato
Servings: 4
Author: Veronique Eichler

This site uses Akismet to reduce spam. Learn how your comment data is processed.

Life is too short to eat bad food. Join me in my quest for healthy meals inspired by the Mediterranean diet!
Read More »