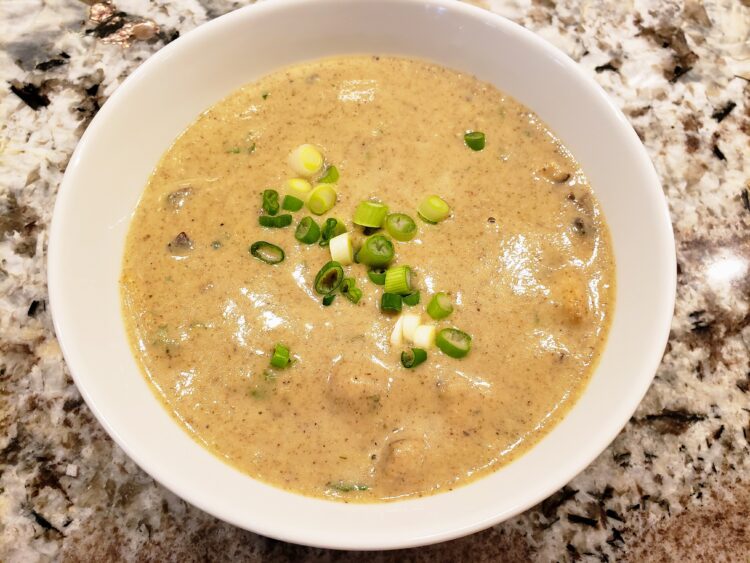 A classic made healthy

Cream of mushroom soup is one of the ultimate comfort foods most Americans grew up eating from a can. It’s also used in numerous casseroles, whose recipes have been passed down from generation to generation… Campbell’s introduced that product in 1934!

As you know, canned soups are highly processed, high in sodium and full of ingredients you can’t pronounce. Campbell’s introduced a few years ago a “heart healthy” version that you might think would be better for you. Granted, it is lower in sodium, and that’s a good thing. But it contains even worse ingredients than the original recipe, such as Disodium Guanylate, Disodium Inosinate, Potassium Chloride, Calcium Carbonate…

Once you realize how easy it is to make at home, and so much tastier, you will never look back!

For this cream of mushroom soup, I like to use a mix of mushrooms. White button mushrooms, portobello, shiitake, cremini, are a few examples that work great. If you like to forage for wild mushrooms around where you live, just make sure they are safe!

You will need a good vegetable broth. If you make your own, kudos to you. If you don’t, here is a dehydrated one I like to keep in my pantry. It has no artificial ingredients or preservatives and tastes really good. https://amzn.to/3bPOjs9

Tarragon is one of these spices I bought once for a recipe, then didn’t use again for over a year… But now that I have added this cream of mushroom soup recipe to my repertoire, my jar is quickly emptying out! It’s also great in salad dressings or with a lot of other things. I just tend to forget about it… Of course if you can find some fresh tarragon, the result will be even better!

Then all you need is a couple of shallots, scallions (green onions), flour, milk, olive oil, salt and pepper!

How to make cream of mushroom soup

Start by heating the oil in a large heavy pot. Add sliced mushrooms and a pinch of salt.

Cook until browned and most liquid has evaporated.

Add shallots and green onions and cook until softened.

Add flour and stir to coat the mushrooms.

When the flour is combined, add vegetable broth and milk, scraping the bottom to loosen any bits from the pot. Add tarragon, salt and pepper.

Cover and bring to a light boil until the liquid has thickened a bit.

Remove from the heat. Transfer half of the soup to a food processor or blender and process until smooth; return to the pot.

Alternatively, use an immersion blender (aka hand blender) to pulse the soup until somewhat blended but some whole pieces of mushroom are still visible. My immersion blender is one of the tools I couldn’t live without… Here’s one I strongly recommend: https://amzn.to/3oWLQ30

Stir in fresh parsley et voila! Get ready for a taste sensation!

For other delicious soup ideas, try these: 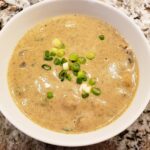 This site uses Akismet to reduce spam. Learn how your comment data is processed.

Life is too short to eat bad food. Join me in my quest for healthy meals inspired by the Mediterranean diet!
Read More »